Yes Virginia, there is a Patron Saint of Purgatory 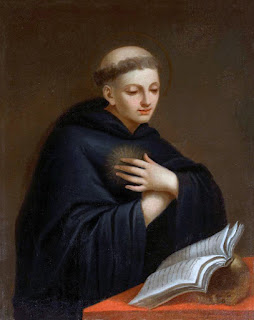 St. Nicholas of Tolentino was born in answer to the prayer of a holy mother and was consecrated before his birth to the service of God.  Named for the miraculous St. Nicholas of Myra, at whose shrine his parents prayed to have a child, at the age of 16, he joined the Order of Hermits of St. Augustine.

I won't go too much into his life and earthly accomplishments. You can easily find more about St. Nicholas online; I want to reflect briefly on why the Church has declared him the patron saint of Purgatory (or, more specifically, Patron of the Holy Souls).

St. Nicholas lived a very austere life in an Order already quite austere in its practices.  During his life, he received visions of Purgatory, which his close acquaintances attributed to his holiness, and his rigorous fasts.  Because of these visions, he conceived an ardent charity for the Holy Souls and was often granted revelations that the souls whom he had prayed for at Mass had been admitted to the Heavenly Kingdom.

Despite his evident holiness, St. Nicholas was often haunted by his own sinfulness until he received a vision of Our Lady who said, "Fear not, Nicholas, all is well with you: my Son bears you in His Heart, and I am your protection."

St. Nicholas took his repose in the Lord on September 10th, 1305.  He was canonized in 1446 by Pope Eugene IV, and because of his great devotion to the Holy Souls, St. Nicholas was proclaimed patron of the souls in Purgatory in 1884 by Leo XIII.

Devotion to the Holy Souls seems to have experienced a revival among many Catholics, which is certainly a worthy devotion, as every soul we liberate from Purgatory by our prayers and meritorious works becomes our grateful intercessor in heaven.  So if you are praying for the Holy Souls today, don't forget to invoke the powerful intercession of St. Nicholas of Tolentino, Patron Saint of Purgatory.

Fr. Brendan McGrath
Fr. Brendan McGrath is a priest of the Roman Catholic Diocese of Hamilton, Ontario. He was born in the shadow of St. Joseph’s Oratory in Montreal in 1979. Coming to Ontario with his family at a young age, he has been ministering in the Church since the age of 8 when he first began to serve Mass. Experiencing his call to the priesthood in high school, he began his seminary studies at St. Peter’s Seminary in London following the completion of his undergraduate degree. Since his ordination, he has served as Associate Pastor of St. Mary’s in Owen Sound, St. Joseph’s in Guelph, and Our Lady of Lourdes in Hamilton. He then served as Pastor of St. Mary’s in Mount Forest, and Administrator of St. Teresa’s in Kitchener. Fr. McGrath has served as Diocesan Director of Pastoral Care for the Extraordinary Form since September 1st, 2018. All opinions are my own.